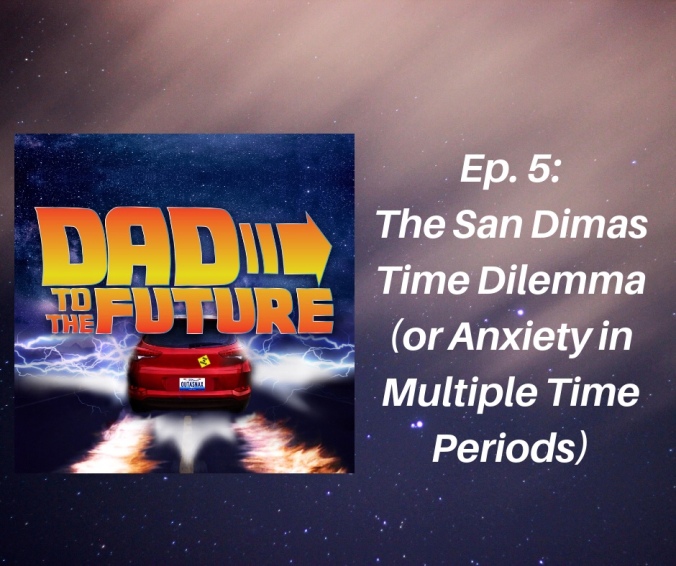 San Dimas Time.
It’s a trope in time travel stories. It’s when tension is added to the story by having two or more different time periods linked to one another, time running concurrently, even though it makes little sense since one of the characters has a time machine at their disposal. It gets its name from Bill and Ted’s Excellent Adventure. Rufus tells the duo that no matter where they go in time, the clock in San Dimas is always running, meaning even though they have a time machine, they have do have a finite amount of time before they have to do their research and get back to give their presentation.
If you start paying attention, you start seeing that trope in a lot of time travel movies and tv shows – including Doctor Who, Back to the Future, Quantum Leap, Frequency…trust me there’s a lot of them. Look them up online.
Anyway, this week’s episode is about my own personal San Dimas Time dilemma in my own life, and how I fight it.
I realized I had developed a bad habit in the way I spoke about this time a year ago. I did it a lot, but I noticed it most when were putting our son to bed at night – he was about 8 months old then. We would be in the bedroom – he co-slept with us until just a couple of months ago – Betsy would be nursing him, and I’d be on the bed next to them, us chatting quietly as he dozed off.
Here’s the bad habit I had developed: I would, somewhat anxiously, rattle off all the work I had to do after we had him to bed, and what I had to do the following day. I was three months into working entirely for myself, both as a real estate agent and a massage therapist. That sounds like an odd mix, but in the couple of years I’ve been an agent, I’ve met a lot of people like me: Agent slash massage therapist, agent slash yoga teacher, pilates instructor. You get the idea. It gives you a chance to flex entirely different job skills in either line of work. The most difficult part, to be honest, is the wardrobe change if you’re wearing both hats in the same day.
Anyway, trying to basically run two different businesses at the same time was stressful. Constant anxiety, constantly on the move, working with clients, arranging showings for home and apartment tours, and so on. It seemed like I was being conversational with my wife during bedtime on the surface, but I was more just talking to myself, talking through everything that had to be done. Instead of, you know, having actually quality time with spouse at the end of a long work day.
Only a small part of me was present with my family. Another part was a half-hour an hour later doing work after we had Harrison put to bed, another part of me was living in the next day, and the next week, and top of that, the end of the month, wondering if we’d once again barely be able to make ends meet and pay our mortgage.
What I can tell you though without giving you a whole bunch of examples in my past, is that not being able to be in the present moment wasn’t some new development born out of us having our first child and me struggling to make money in my work. I’ve always been like this, in one way or another.
I’ve always been anxious, racing against the clock in multiple time periods.
After picking up on this bad habit I was doing at our son’s bedtime, I decided to work on it and change the habit. Not just then, but any time I started a conversation with Betsy, I would check myself before I began speaking to make sure I was just about to start rattling off my to-do list. Was it necessary? Would it actually be useful information to her, or was I just using her as a sounding board?
This wasn’t easy at first. A few nights, I just ended up lying quietly on the bed for a few minutes, trying to think of something to talk about other than my to-do list.
I’ve gotten better at this…but it is still a constant struggle. I may not actually rattle off my to-do list, but it’s still often running in my head. But I get a little better, and little better every day. Being present in the moment, especially those fleeting moments of my son’s early life.
Here’s the thing: I have a lot going on in my life and a lot I want to accomplish: I want to work in two entirely different professions, I want to produce and create art…well, at least podcasts…I want to be a good husband, father, friend. And I have all of these different…time lines…running at the exact same time. I want to be all of these things at once, and that…isn’t how actual time works.
But I’m working on that. Because life is too short and too precious to be living on San Dimas time.

One thought on “Ep. 5 – The San Dimas Time Dilemma (or Anxiety in Multiple Time Periods)”